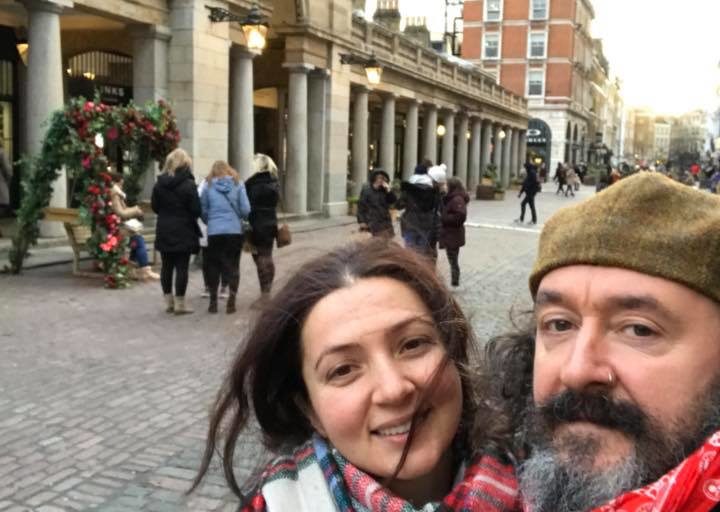 It has become somewhat of a ritual for the past seven Christmases that I have been sharing with Alan, the ritual involves selecting a theme for the new year, usually around Christmas time. For example, last year our theme of the year was Deliberate Recreation, that is trying to deliberately recreate certain events in life through deliberate actions, (btw it was my husband’s idea), this year, our aim is to live an entire year intuitively, less intellectual thinking, more intuitive living… no pressure.

Having made a few deliberate decisions last year (whether successful or not remains to be seen), this year, we are looking forward to the next challenge – to live life more intuitively for the next 12 months.

January is always a good month to start the year fresh, so here I am journalling my / our journey through living life less planned for the whole year.

It’s some time around mid-January and I feel entirely frustrated. I am going mad. The intentions for the year have started so well as well… as part of New Year’s commitments I should be experiencing the life of freedom and intuitive living, instead, my entire routine seems to be upside down… oh, wish I had a better excuse for myself but, although am embarrassed to admit, it’s true… my mother has flown over 3000 miles to spend 2 weeks with her daughter, that is me, slightly ungrateful, to the border of selfish child… and the disturbance of the routine has shaken my daily grind so much so that I feel almost like a caged animal trapped inside the cells… OK, perhaps this is an exaggeration, because, the real truth is, I am always looking forward to mother’s annual visit in England, and contrary to my reservations, year after year, she proves to be a wise counselor in all affairs of life.

So, what’s the problem then?

Suddenly I start to realize my frustrations have nothing to do with my mother’s visit (phew, that’s a relief), but everything to do with my own embedded daily life routines, so embedded that despite my attempt to have entirely freestyle days, I have become a victim of my own made up rules of daily living so much that can’t even enjoy 2 weeks of modifications to the routine.

Finally, I make a decision, if I/we ever have a chance of sustaining the 12 months of intuitive living, I decide it is in my own best interests to let go of my ideas of what intuitive living should be, instead, intend to let the daily events surprise me as they unfold in front of my eyes. This little trick of the mind has proved successful because finally, I start to enjoy randomly generated routines which involve NOT heading to my office every morning, instead, enjoying time out with my mother, skipping yoga class on a Saturday morning is not such a nightmare, after all, I can do yoga at home (as long as I have a Giam App), and I learn that there is absolutely nothing wrong with not checking emails every 5 minutes or so.

What does this have to do with the sabbatical anyways? Well, the idea has started right after I and Alan came up with our New Year’s theme, January started with me coming across to an article about this guy, a designer, who takes a planned sabbatical every 7 years, in order to recharge himself creatively… I guess for the next 7 years? Anyways, it was fascinating to read how he’d spent the entire year living from Japan to Italian Riviera, I was so taken by this idea, I rushed the article through Alan’s inbox insisting he’d read it immediately with an intent to discuss our own planned sabbatical.

The truth is, the idea of a sabbatical is not something entirely new, over the past 3 years, we have been casually discussing the idea of taking around 4 months or so to go over to Georgia where we have a home in the capital Tbilisi, as well as a family summer house in the mountains 3 hours drive away from the capital. We marveled at the ideas from transforming our home into a writer’s retreat to building a massive”tone” / a traditional Georgian clay oven and growing our own herbs garden for at least one full season.

Inspired by the idea of the sabbatical, I have noticed started repeating myself “there is no time like the present” more frequently than not. Eventually, Alan got the message… guess he did because one uneventful evening told me “OK, you come up with a plan of what we need in order to make our sabbatical a success and let’s do it”.

Excitedly, I started making the outlines for the plans… what we would do with our home in England, a car, maybe best sell a car and buy again when we come back? How much extra cash we would need in the bank? where to store our “stuff”? What if we hate being in Georgia and we’d give up everything in England? Can we be bothered to start over again? Moving a home down the street is a hassle, never mind moving a country? I mean Georgia is my home country, but it’s more of an adopted country for Alan, what if he really dislikes living there? He seems to love visiting the place for a few weeks a year, but would he love living there for a year?

Thoughts were pouring in my mind even as I slept and then… our daily life started to unfold in front of our eyes and the real “stuff” started to happen while we / or rather I was planning the other stuff. I also started to realize (to somewhat joy for Alan), that I was not ready for the sabbatical, after all, I started to appreciate all the projects we have been having on the go here, in England, where we are RIGHT NOW, and actually realized I am still excited about the idea of minding my/our business right where we are. I discussed my “discovery” to Alan and we both agreed we are putting the sabbatical on hold, at least until further notice. Instead, we agree to enjoy living in a flow right where we are.

I suppose this is my first lesson of living life in the flow, I tell myself to stop having assumptions how intuitive living should be, and instead… “feel the flow” (of course, borrowing a phrase from the The Force Awakens) … and that flow, tells me/us to mind our business right where we are.

Thank you January, you have taught me that the going with the flow can mean not flowing anywhere, instead, staying right here, right now.