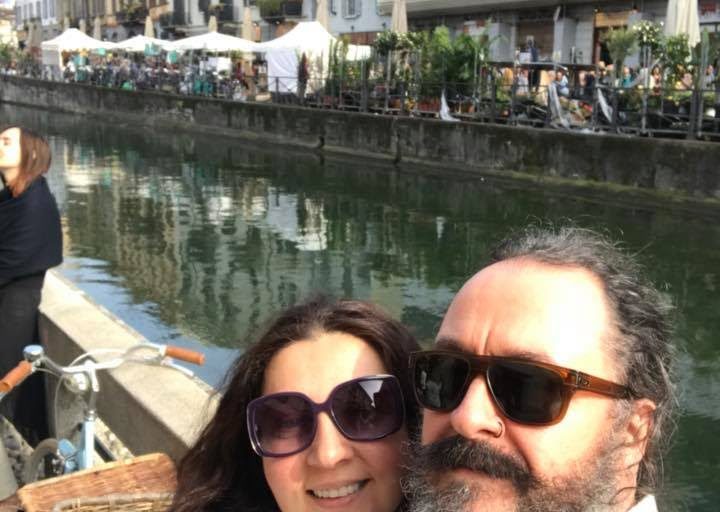 A few weeks ago I found myself in Milan with Alan, strolling down the canals in Navigli area. If you’ve been to Milan before, but never visited Navigli neighborhood you should really plan a city re-visit just to hang out over there. It’s vibe is more like graffiti meets rustic pizzerias and the best of the artisans, rather than Michaelangelo’s city, which on that particular sunny April day suited us perfectly.

The cappuccinos in the cafe next door that cost just 3 Euros for two was an added bonus, and even the rain the next day could not spoil our much-anticipated visit to Fondazzione Prada, with it’s striking building displaying WWII art it was an Italian city experience like no other.

It was during that visit to Milan, in particular, over potato and lentil soup in the local’s trattoria when me and Alan finally decided to go back to our original New Year’s resolution to experience the life less planned that we decided it would be a great idea to pack all our belongings, store in a 75 sq/feet storage unit down the road and head over for the entire summer in our other home in Tbilisi, Georgia. So here I am, seating in a half-empty apartment typing away as I check and cross off line by line my to-do lists before we catch the next flight to Tbilisi end of May for our next, intuitive adventure.

More I thought of this move to Tbilisi, more I started to realize how fluid the ideas can become. When we originally thought of the sabbatical, it felt so drastic that we shelved the idea until further notice, but as the time moved on, the idea has started to transform itself from rigid to flexible mixed with the emotions of excitement and anxiousness, until we finally realized it’s one of the best ideas we’ve had for a while.

And why not? We are not attached or tied to anything right here. We have homes in Tbilisi, friends, family, summer home for the weekends, 4×4 parked in the garage for a day out trips, a predictably good weather and fully functional nomadic office to carry on business as usual? After all, how many people would love to have the opportunity to get away from the daily grind all summer?

Why did it take us so long to feel comfortable with the idea of the adventure?

Recently we watched a brilliant TV series on National Geographics on the life of Einstein, during the rise of the Nazi party his wife Elsa begged Albert to get away from Berlin, but he kept refusing, “I like my tobacco shop, I like my apartment, my books, my life is here” he kept saying, yet after finally leaving Berlin behind, his new life in Princeton was not only life saving but it was filled with the excitements of new adventures and breakthroughs. Not that I would compare myself to the genius, but more I thought about our summer move, more I kept thinking of all my daily attachments… I too like my library of books in the living room, I like that I can walk down to a local coffee shop and go to a yoga class in my neighborhood… after all, it took me ages to find a real sense of community since I moved out of London, do I want to give back the apartment we currently rent and come back to nothing and start all over again? But, more I thought of those details, more I realized how the mind can get attached to things, places and even to the stuff that are totally unimportant to our lives. It definitely made me realize the importance of becoming more fluid in my needs and desires, after all, it only seems “normal” to be more intuitive than rigid right?

So cheers to living life less planned, I’ll see you in May as I update my journal of intuitive leaving.